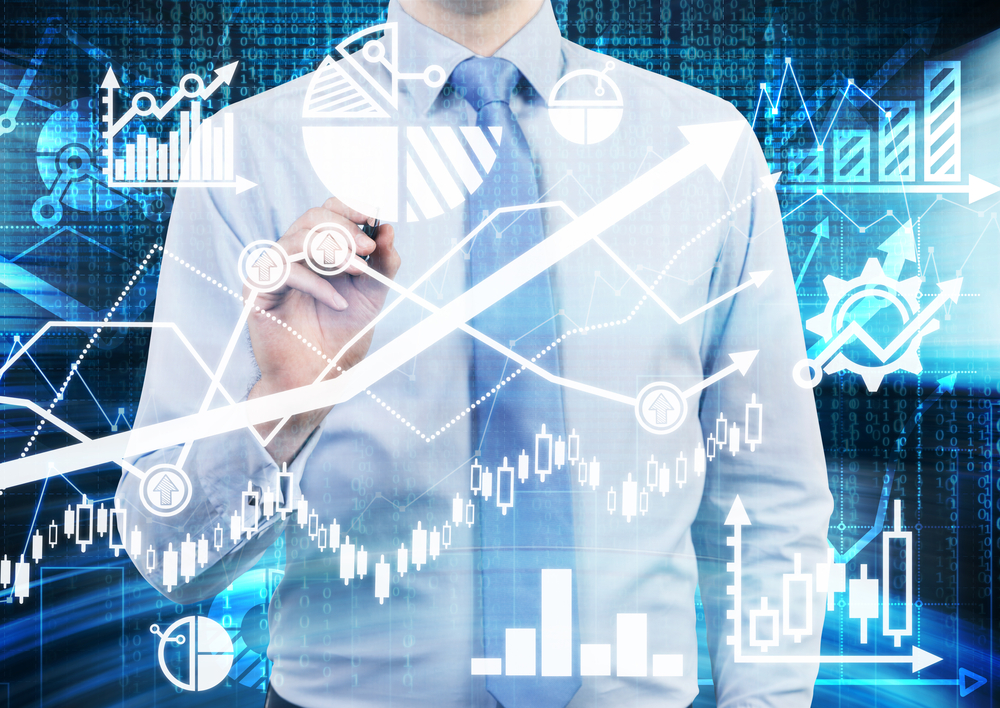 New developments in data collection and software architecture have revolutionized a myriad of industries by allowing them to perform data analysis on large data sets. Of course, law is infamous for eschewing quantitative metrics that have been long entrenched in most industries. This conservative approach has discouraged third parties from attempting to penetrate this data market, leaving us with few resources to analyze important metrics like lateral moves, firm growth, and more.

However, thanks to new innovations and services in the legal data market, we can start to crack the door open to a “big data” approach for law. We took a multivariable approach to this new data to predict trends in hiring, practice growth, class movement, firm growth, and more. We looked at lateral moves of Am Law 100 associates (class years 2008-2015) from 2012 to today looking to see what patterns emerged in associate lateral hiring.

The question of a class year’s propensity to move is complicated by a number of factors. Several variables complicate this question, the chief among them being market conditions. Additionally, the attractiveness of different class years makes it difficult to compare without a long-term study; however, we can glean several interesting trends from this data. 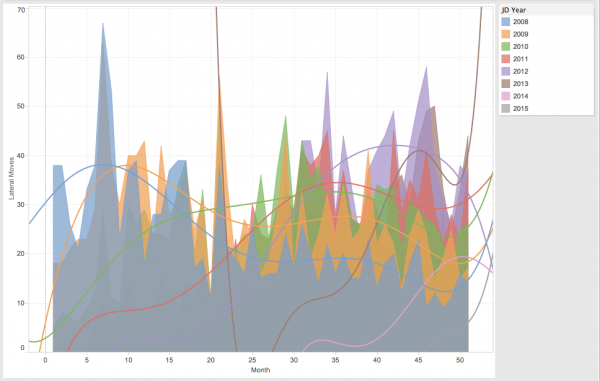 Lateral volatility tends to reflect evenly across JD years with respect to their volume, meaning associates leaving to in-house, government, and non-legal positions, have the same propensity for moving as their counterparts who stay in Biglaw.

Also interesting are the changes in associate lateral patterns after the class of 2009. Both 2008 and 2009 experienced pronounced (and almost parallel) growth in 2012 as fourth- and third-year associates—respectively. However, after 2012, lateral movement for the two class years begins to wind down. Comparatively, 2010 and 2011 started slower, but they have had significantly more staying power compared to the two previous years. This holds in line with anecdotal evidence we have monitored through the years, that across all class years, marketability rapidly declines after an associate’s fourth year. 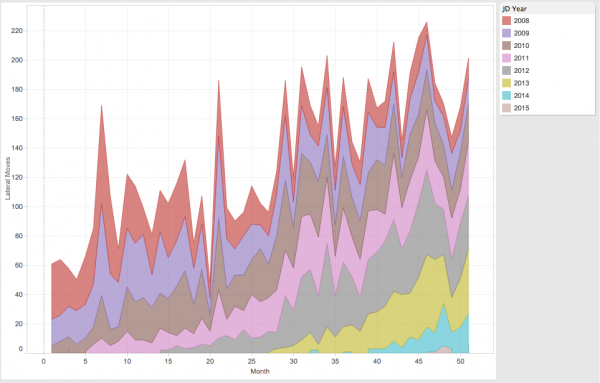 As for the question, “Do class years have different propensities for lateral movement?,” this graph dispels that notion. The graph’s symmetry reveals market conditions and the overall marketability of associates by experience play a much larger factor than any other variable between class years.

Every legal market likes to think of itself as distinct in different ways. New York’s long nights toiling over purchase agreements and S-1 filings beget late mornings that start synchronously with their San Francisco counterparts who stroll in, early in the morning with a docket full of tech giants to service before they leave at seven. Although some of these distinctions have merit, lateral associate movement since 2012 has grown at nearly at an identical rate across all regions — save for New York.

Despite regional reputations for different practice strengths, the overall homogenization of practices in major legal markets has hedged the overall city against a shock to any one particular practice area. Houston, for example, has long been known as the bastion of the oil and energy industry, but only 12% of their associate ranks are made up of Energy attorneys — though many other practices tie into this specialty, or serve these companies in other capacities.

It should not be surprising then, when we see there is virtually no change in the rate of associate growth since 2012 across major U.S. markets. The lone exception is New York, whose appetite for junior associates has skyrocketed in recent years. 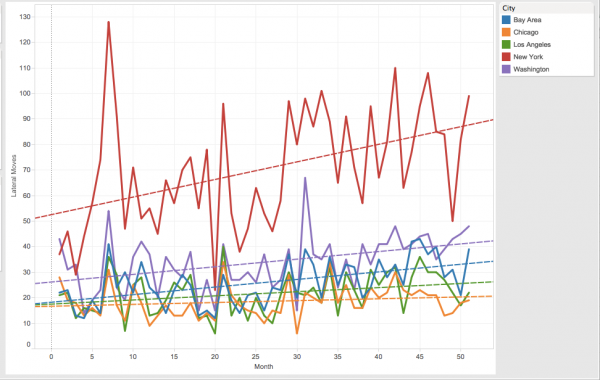 Indeed, this graph shows that most of the increase in lateral movement from junior associates has come from New York in recent years. 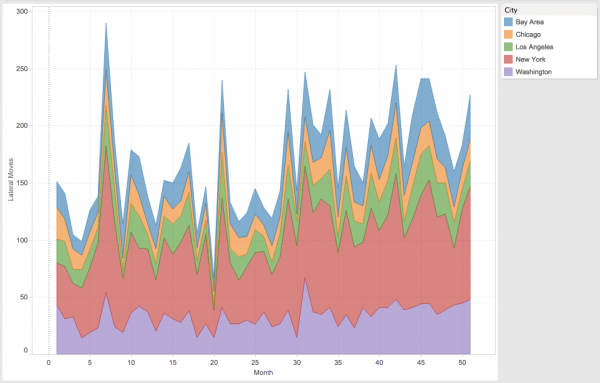 Nonetheless, overall sectors can have a discernible effect on the productivity of different cities. For example, while San Francisco boasts a large offering of practices and specialties, the tech sector feeds many of these practices. If general lit spikes in San Francisco, it may have no impact on corporate whatsoever. However, when activity in the tech sector expands — as we’ve seen recently — the city’s market flourishes step for step.

Practices are largely divided into cyclical and countercyclical groups. These groups are not always discrete and practices tend to fall somewhere on the spectrum. As we’ve pointed out before, associate moves tend to be a good indicator of practice growth. According to our first graph, nearly every practice has experienced some growth since 2012, with the corporate practice setting the curve. 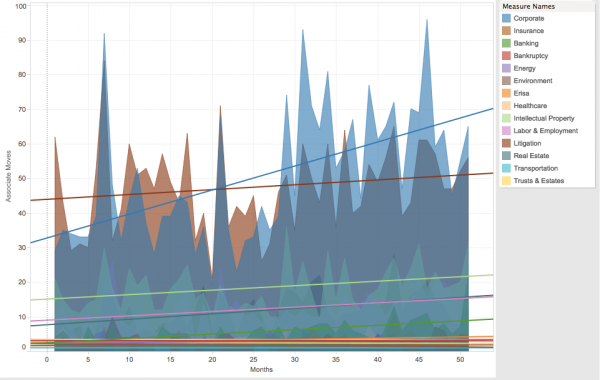 This view becomes more interesting if we raise our trend line to the fourth degree polynomial. While litigation has gotten a bad rap recently, its rate of growth is actually surpassing corporate’s growth nationally over the last year. There are several schools of thought about litigation’s classification as a cyclical or countercyclical practice. Some insist work increases during recessions as companies look for other sources of income. Others purport that litigation work decreases as company coffers run low and are unable or unwilling to invest in litigation.

These graphs somewhat dispute this assertion if we take lateral associate movement to be indicative of a practice’s health. Litigation movement actually rose during the boom year of 2015 while corporate fell from its lofty heights.  It is important to note, however, that these stats reflect national trends and citywide trends can vary greatly. 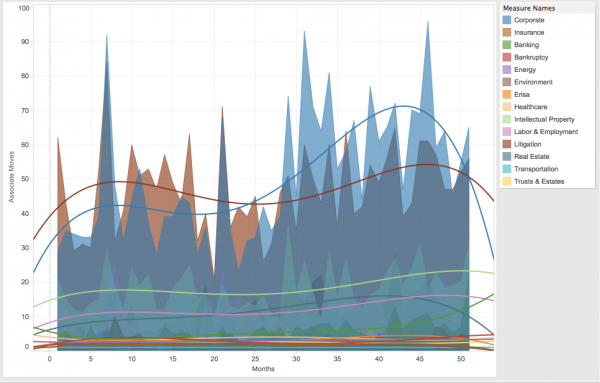 If we remove the top practices, we can gain a better vantage of some of the comparatively smaller practices. Real estate’s drop mirrored corporate’s while labor & employment and banking rose significantly over 2015. Other practice areas remained relatively stable in comparison. 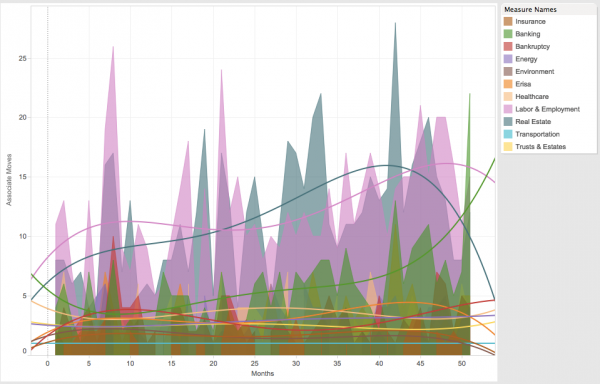 Overall, it’s hard to understate just how vital corporate and litigation work is for young associates. Together, they made up 57% of the moves in our study from 2012-today. 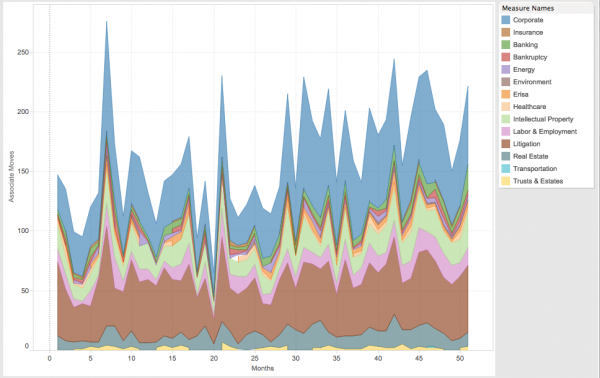 Though sensational headlines would have you believing otherwise, the mega-acquisitions that rock the legal world periodically are very rare. Most firms adopt a steady and accretive hiring plan that hedges against the potential for a market downturn. Laterals into a firm by month do not vary by much; the standard deviation for an Am Law 100 firm’s lateral associate gains was just shy of one, meaning roughly 68% of a firm’s monthly lateral moves will vary by ± 1 associate move every month.

If you squint at the graph, you will notice that from month-to-month, associate movement is relatively stable. 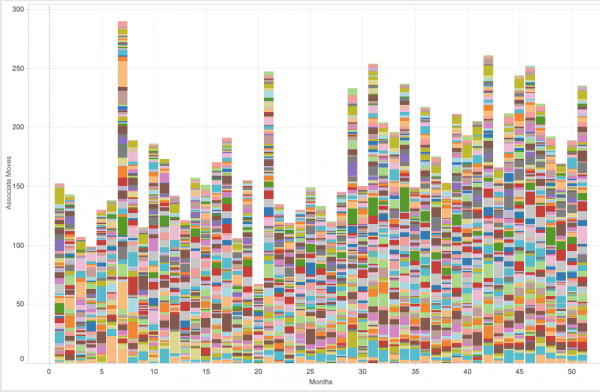 The application of analytics in law is still in its infancy. From a market point of view, firms will look to their client’s health and market for future indications of their firm’s health. From a macroscopic perspective, it’s difficult to project the direction of the lateral market given the dearth of accessible data, antithetical practice growth, the influence of policy (e.g., Alice Corp v. CLS Bank), and more. Data is more than a buzzword now — we actively use it to project a firm’s practice needs, future openings, growth, decline, and more. The push towards a data driven legal market is a push towards a steadier and more nuanced market.