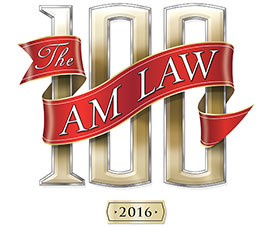 The new Am Law 100 rankings are finally in, and the race to analyze the results is underway. Those questioning whether Latham could defend its first-time title from 2015 were pleasantly surprised, as the firm fended off DLA Piper and Baker McKenzie, who were in close second and third, respectively.

Most Am Law rankings remained stable within the top 100 firms. Few firms gained or dropped more than a few places in the rankings. The biggest drop was Hughes Hubbard (dropping from 78 to 90). The two largest leaps were made by Locke Lord (which springboarded up 14 places off the Edwards Wildman merger) and Polsinelli (which gained 12 spots in the rankings after leaping from 86 to 74). Only 13 firms boasted the exact same rank as the year before, compared to 24 last year, and 19 moved just one spot (click to enlarge images).

Overall attorney growth for Am Law 100 firms was slightly down this year. The average firm grew by 17 net attorneys compared to 20 last year. Morgan Lewis grew the most of any firm, increasing its number of attorneys by 542 thanks to the mass lateral hire of Bingham McCutchen lawyers. On the other end of the spectrum, Littler Mendelson lost 114 attorneys, a 10.4 percent loss. Littler made news earlier last year for its move to a centralized staffing hub in Missouri and subsequent staff layoffs; however, its PPL dropped by only 5 percent.

Partnership stocks were replenished at almost exactly the rate they were lost. Overall growth in the total number of equity partners in the Am Law 100 was a paltry 0.6 percent. Not all firms experienced meager growth, however. Morgan Lewis continued its candidacy for “Best 2015” by growing the equity partnership ranks by 44 percent, thanks again to the Bingham deal. By comparison, the second-best firm, Ballard Spahr, was over 30 percentage points behind, with a growth rate of 13 percent.

Everyone’s favorite metric, PPP, yielded interesting results this year. Overall, PPP grew by 4 percent in the Am Law 100. Lewis Brisbois impressively grew its PPP by 24 percent while increasing overall headcount by 14 percent. Interestingly, the equity partnership stock actually shrunk by one, while the non-equity partnership ranks increased by 34. Littler was hard hit again in PPP, losing 17.5 percent of last year’s PPP, dropping them to $425,000. Arnold & Porter and Baker & McKenzie rounded out the bottom three in PPP percentage losses.

Newcomer metric PPL looked to challenge its more established brethren PPP. The American Lawyer asserts that PPL will eventually replace PPP as the barometer of a firm’s performance, and so far this seems to hold true. The two-year change in PPL correlated more closely with the two-year change in gross revenue than the change in PPP did, by over 25 percent. Ballard Spahr grew its PPL by an unheard of 60 percent, more than twice its closest competitor (Fish & Richardson, 27 percent). PPL also rose by 4 percent overall in the Am Law 100, in line with PPP’s growth.

Overall, 2015 was a solid year for Biglaw. With overall growth in revenue and efficiency, Biglaw is primed for another strong year in 2016. If you are interested in learning more about your firm’s metrics and where they stand in the market, feel free to reach out to one of our recruiters at Lateral Link.